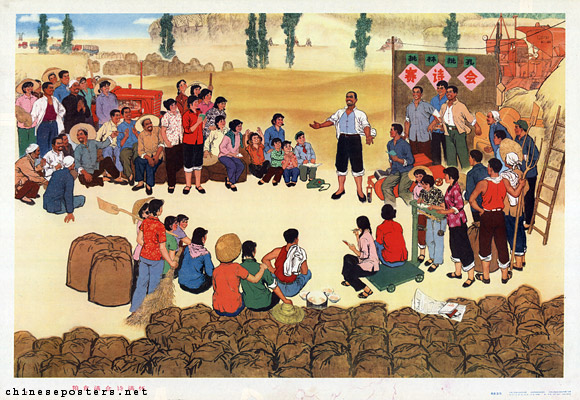 On June 22, 1974, Jiang Qing visited Xiaojinzhuang (小靳庄), situated to the north of Tianjin and the southeast of Beijing. She called it her "spot", her own model village. The village had gained some prominence through its participation in the anti-Lin Biao, anti-Confucius Campaign. Being a model in Jiang’s book basically meant challenging the "pure production" standpoint of Deng Xiaoping and other moderates, and emphasizing the benefits in the realms of consciousness and culture that the Cultural Revolution had brought to the rural areas. In the case of Xiaojinzhuang and its 101 households, this took the form of praising the "ten new things" that had emerged: "starting a political night school, building up a team of ‘poor and lower-middle peasants’ versed in Marxism and anti-Confucian history, singing revolutionary model operas, establishing an art propaganda team, writing poems, opening a library, telling revolutionary stories, developing sports activities, and ‘transforming social traditions, destroying the old and establishing the new’". But not necessarily agriculture, much to the annoyance of Deng, who tried to stop the flow of state funds that was needed to support the village’s model status.

As with other model communes such as Dazhai and Daqing, Xiaojinzhuang became a magnet for revolutionary tourists who came to study the concrete situation in order to emulate it back home. Moreover, whenever a new campaign unrolled, Xiaojinzhuang had to perform according to the script laid down by others. As a result, the village was at the forefront of the campaign to criticize Deng Xiaoping that started in 1976. But when Jiang and her Gang of Four were brought down later that same year, it was very vocal in the criticism of its erstwhile ‘benefactor’.

After Jiang’s support had vanished, Xiaojinzhuang continued to serve as a model, but now as a negative one: everything that had been a source of pride now turned out to be a target of condemnation. The night school was seen as an institution that stifled technological innovation, the rural opera singing and poetry writing were presented as impediments to agriculture and scientific education. 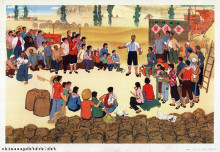